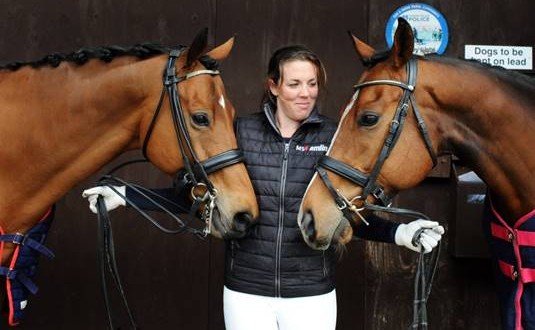 Buckinghamshire based thoroughbred dressage rider, Louise Robson, has been invited to take part in the Queen’s 90th Birthday Party at Windsor Castle next weekend.  Robson will be attending the private celebrations at the castle with two of her horses, Quadrille and Prince’s Trust, both of whom are owned and bred by Her Majesty.

Louise Robson, sponsored by Amlin Plus,  with  Quadrille (left) and Prince’s Trust (right) at her yard in Buckinghamshire. The trio will be attending the Queen’s 90th Birthday Party at Winsdor Castle (12-15 May).

Quadrille and Prince’s Trust carried the Queen’s racing silks to victory on multiple occasions, winning three races each for their respective trainers, Richard Hannon Snr and William Haggas.  Upon retirement the two horses were transferred to Robson’s yard for re-training and a new career in the dressage arena.

Robson and the nine-year-old Quadrille are now competing up to Advanced level at dressage competitions around the UK.  Last year proved a highly successful year for the duo, which included winning the Advanced Medium Music class at the Retraining of Racehorses (RoR) Dressage Final at Houghton Hall.

Louise Robson commented, “The Queen absolutely loves her horses and I’ve been lucky enough to have a number of them in my care.  I am super excited to have been invited to take part in her Birthday celebrations at Windsor.   I just hope that Quadrille and Prince’s Trust behave themselves on the day!”